Antonín Dvořák: Symphony No. 8 in G

Claire Thai is an internationally recognized harpist, having won a prestigious Anne Adams Award from the American Harp Society Foundation, a Lyon & Healy Award, 1st place at the Suoni d’Arpa competition in Italy, and 1st place at the International Portuguese Harp Competition. She won the Grand Prize at The Phoenix Symphony Youth Orchestra’s Concerto Competition and first place in competitions held by the Tucson Symphony Orchestra, Southern Arizona Symphony Orchestra, and Civic Orchestra of Tucson.

Born and raised in Tucson, Arizona, Ms. Thai began studying harp at age 5 and piano at age 4. She has worked with numerous world-renowned harpists and has appeared as a soloist in Alberto Ginastera’s Harp Concerto with The Phoenix Symphony and Henriette Renié’s Harp Concerto with the Tucson Symphony Orchestra. With the National Repertory Orchestra, she performed Debussy’s Danses Sacree et Profane and Ravel’s Introduction and Allegro. She served as principal harp of the Tucson Philharmonic Youth Orchestra from 2015 to 2018 and performed a solo program at the World Harp Congress in 2017. She was a fellow at the Aspen Music Festival in 2021 and at the National Repertory Orchestra in 2022.

In addition to performing, Ms. Thai is a composer, being involved with the Tucson Symphony Orchestra’s Young Composer’s Project for seven years. She was commissioned by the Vail Preservation Society to score a new historical documentary, Voices of Vail, which premiered in 2018, and was recently commissioned by the Tucson Symphony Orchestra to compose and premiere a harp concerto.

Ms. Thai received a Bachelor’s degree in Harp Performance from the Curtis Institute of Music and is continuing her education at Curtis in the Master’s program. She studies with Elizabeth Hainen, solo harpist of The Philadelphia Orchestra, and is the L. Daniel Dannenbaum Fellow at Curtis. 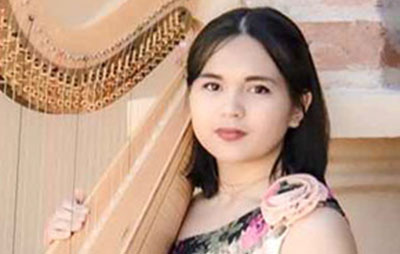