The BCSO is following CDC, state, county and event venue mandates and recommendations in effect at the time of this concert.  At the present time, the university requires visitors to be masked at all times while inside the Life Sciences Building.  Please check this page on the day of the concert for the most current admission requirements.

Thomas Mesa, Cuban-American cellist, has established himself as one of the most charismatic, innovative, and engaging performers of his generation. He was the winner of the $50,000 First Prize in the 2016 Sphinx Competition and the Astral Artists 2017 National Auditions. He has appeared as soloist at the Supreme Court of the United States on three occasions and with major orchestras, including the Los Angeles Philharmonic at the Hollywood Bowl, The Cleveland Orchestra, and Indianapolis Symphony Orchestra, Santa Barbara Symphony, and New Jersey Symphony Orchestra.

Highlights in the 2021/2022 and 2022/2023 seasons include curating and performing chamber music programs with the Indianapolis Symphony Orchestra; soloist with Sphinx Virtuosi touring at major venues across the U.S. with Jessie Montgomery’s Divided for solo cello and orchestra and Andrea Casarrubios’s SEVEN for solo cello; and a 30-venue recital tour with duo partner and pianist, Ilya Yakushev. These tours will include places such as Carnegie Hall, the MET Museum, Philadelphia Chamber Music Society, Colburn School of Music, and Kohler Foundation.

As a recording artist, Thomas will release two albums of new music for solo cello and cello/piano. The first is called Division of Memory to be released on October 9th, 2021. The second is a duo album with Michelle Cann, piano soloist and faculty member at the Curtis Institute of Music.

Recently, Thomas was the featured cover story in the September/October, 2020 edition of Strings Magazine. In the fall of 2021, Thomas will be the cello professor at The Conservatory of Music at Purchase College (SUNY).

Parking: The parking lots adjacent to the Life Sciences Building will be available for concert parking. In order to accommodate overflow, concert goers can use the University’s Main Entrance and park in the stadium parking lot, where a Bucks County Transport shuttle bus will be available from 7:00-8:30pm to take you to the Life Sciences Building (where the concert is being held) and return you to your vehicles after the concert. 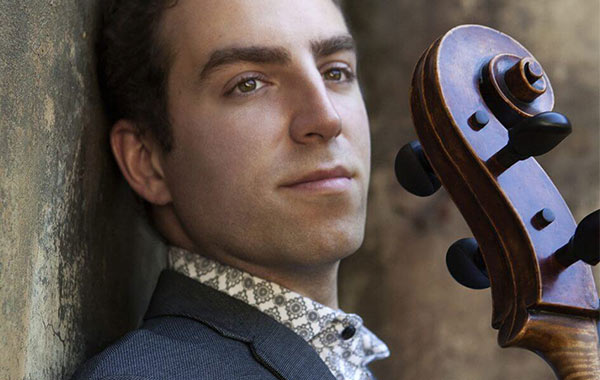