Violinist Julian Rhee has been praised for his “sophisticated, assured tone, superb intonation, and the kind of poise and showmanship that thrills audiences.” (The Strad).   He is quickly gaining recognition as an emerging artist and performer

An avid soloist, Mr. Rhee made his Milwaukee Symphony Orchestra debut at age 8, and has been featured with numerous professional orchestras, including San Diego Symphony and Pittsburgh Symphony Orchestra.  He has performed in an array of venues, including Ravinia’s Bennett Gordon Hall, Pittsburgh’s Heinz Hall, the Madison’s Overture Center for the Arts, Teatro El Círculo in Rosario, Argentina, The Musikverein in Vienna, Bartok Hall in Hungary, and the New World Center in Miami.  Bach, Beethoven, & Brahms Society in Brookline, MA.

A passionate chamber musician, Mr. Rhee’s performance on violin and viola earned him and his String Quartet first prize in the A.N. & Pearl G. Barnett Chamber Music Competition, Rembrandt, Fischoff, and the M-Prize International Chamber Arts Competition. He has performed at and attended festivals including the Heifetz Institute, Ravinia Steans Institute, NorthShore Chamber Music Festival, and Pierce Hill for the Performing Arts.

Mr. Rhee studied at the Music Institute of Chicago Academy, and is currently pursuing a Bachelor of Music degree at the New England Conservatory.  He currently plays the ‘Lady Tennant’ Stradivari of 1699 on extended loan through the generosity of the Mary B. Galvin Foundation, Inc. The Stradivari Society, a division of Bein & Fushi, Inc.  and The Mary B. Galvin Foundation, Inc. 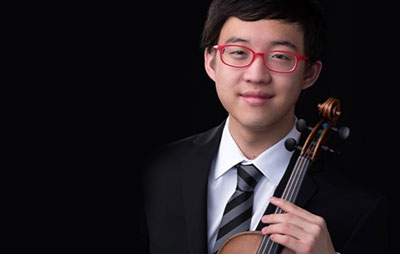