BCSO French hornist for 20+ years and retired IT executive/consultant 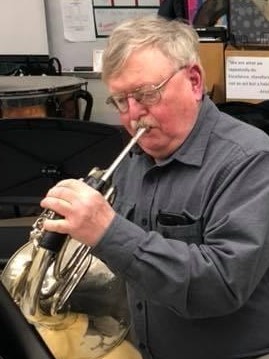 I began horn studies the summer after 3rd grade. When I began 6th grade, I auditioned for Ward Fearn and he agreed to take me on. Ward was a world class teacher and performer, second horn in the Philadelphia Orchestra for 25 years, soloist at the Casals Festivals in Prades, France and San Juan, Puerto Rico. When I was in 7th grade, I was accepted as the youngest member of the Philadelphia Youth Orchestra under Joseph Primavera, where I performed through my first year in college at Drexel.

Also, in 7th grade, I began accompanying Ward to Philadelphia Orchestra Saturday night concerts one or two times a month. As a result of this, I had an opportunity to become closely acquainted with many of the Orchestra members, especially those in Ward’s carpool. They were principal trumpet Gilbert Johnson, principal oboe John de Lancie, and second flute Ken Terry. Being in the green room at the Academy of Music an hour before each concert while Ward was warming up enabled me to meet and talk to many of the world’s greatest musicians. Continuing these experiences for 6 years (until I started college) enabled me to learn more about life in a major symphony orchestra than most conservatory students ever are exposed to.

I had developed a strong interest in electronics at an early age, concurrently with my horn studies. When a high school senior, I had to decide whether to pursue a music career at Curtis or to study electrical engineering at Drexel. Ward and his carpool companions had advised many times that I would enjoy music far more as a hobby than as a profession, and since I was well qualified to enter an engineering career, I should pursue the latter. My years backstage had shown me that the life of an orchestra musician had many rewards, but was also quite stressful, so engineering won out. As I look back from the perspective of 60 years, I must conclude that my mentors were right.

I am extremely fortunate to have thoroughly enjoyed my profession, and all the wonderful years of horn playing, especially these latter years in the BCSO under Gary Fagin’s direction. I am most grateful for the many wonderful friends I have made as a result of my musical activities.