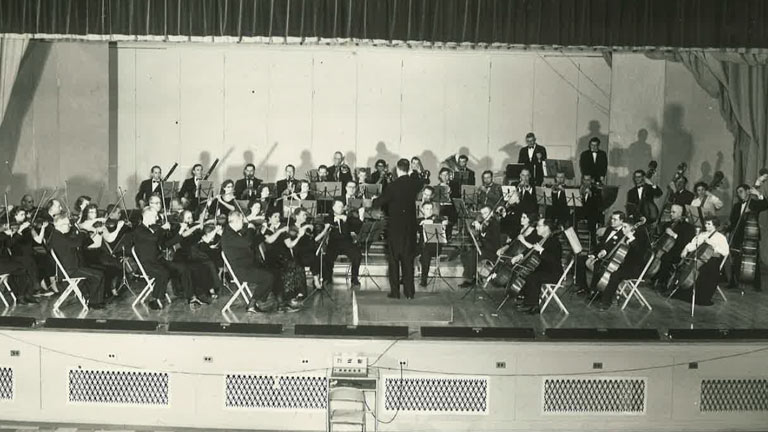 The Bucks County Symphony Orchestra presented its first public performance on Saturday, March 27, 1954 to an appreciative audience of over 800 people at Central Bucks High School in Doylestown.  This inaugural concert of the area’s newest cultural attraction was sponsored by the Chalfont Lions Club.  Ticket prices were $1.00 for adults and 60¢ for children under the age of 18.

Sixty community players, all from Bucks County, played under the baton of Music Director Vernon Hammond, who would go on to lead the BCSO for 27 years.  A reception was held following the concert for the orchestra, board of directors, and friends at the Water Wheel Inn just north of Doylestown.

The Daily Intelligencer reported that “one enthusiastic person from Pittsburgh who attended the concert was heard to remark, “I doubt whether any community in this country could surpass the efforts of the Bucks County group in an opening-night performance.”  The newspaper also reported that “it is the first musical organization of its kind in the county in that its members are all from Bucks County, including the conductor, Vernon Hammond….”  In addition, it was noted that “More than 500 community orchestras are being organized as part of [the] nationwide cultural movement. Response of the local public will give young people an opportunity to take part in the concerts, while the movement will also aid adult education in music, enabling many musicians to return to live music and promote greater appreciation of fine music locally.”