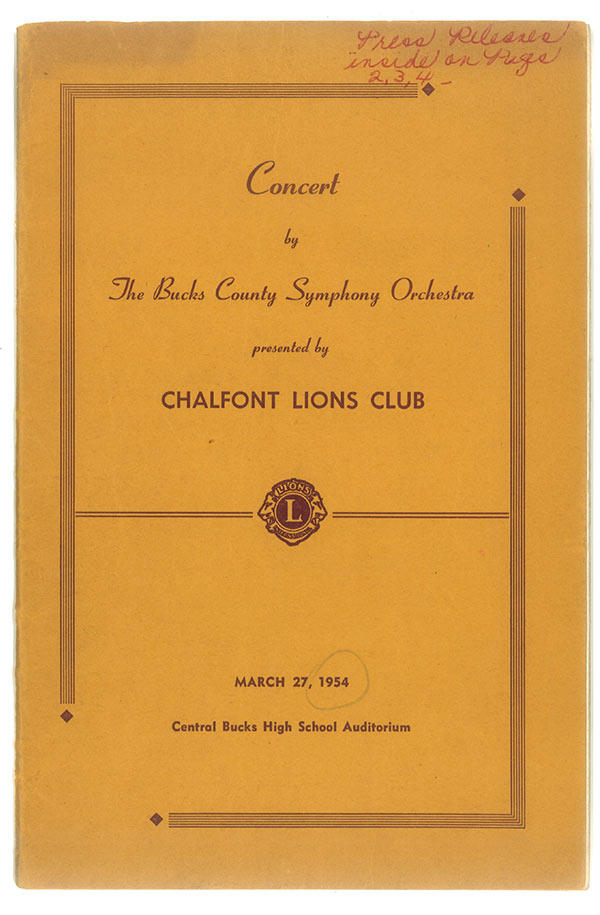 “Patrons of the Saturday night opening concert of the newly-organized Bucks County Symphony Orchestra raved about the performance, which many music lovers described as one of the finest things that has ever happened in Bucks County in the way of music appreciation.” [The Daily Intelligencer]

Just what did the orchestra play that so enraptured over 800 concert-goers during its first public performance?  For this inaugural concert, Music Director Vernon Hammond chose an eclectic mix of relatively short works that spanned from the Baroque Era through the early 20th Century.  The opening number was Trumpet Voluntary, a popular piece that at the time was attributed to Henry Purcell, but which has subsequently been identified as Prince of Denmark’s March, composed by Purcell’s contemporary, Jeremiah Clarke.

The first half of the program included two short works by J. S. Bach—the Arioso from Cantata No. 156 and the “Little” Fugue in G minor—the first movement of Schubert’s “Unfinished” Symphony, and the Carmen Suite No. 1 by Georges Bizet.

Following the intermission, the orchestra presented three of Antonin Dvorak’s Slavonic Dances (Nos. 3, 8, and 10), Alexander Borodin’s Polovetsian Dances, and the Intermezzo from Enrique Granados’ piano suite, Goyescas, transcribed for orchestra.  The concert ended with the exuberant “Dance of the Comedians” from Smetana’s The Bartered Bride.

This concert program was reprised six weeks later at Neshaminy High School in Langhorne, with the addition of the first movement of Beethoven’s Piano Concerto No. 1, featuring pianist Natalie Scull, a 15-year old George School student.