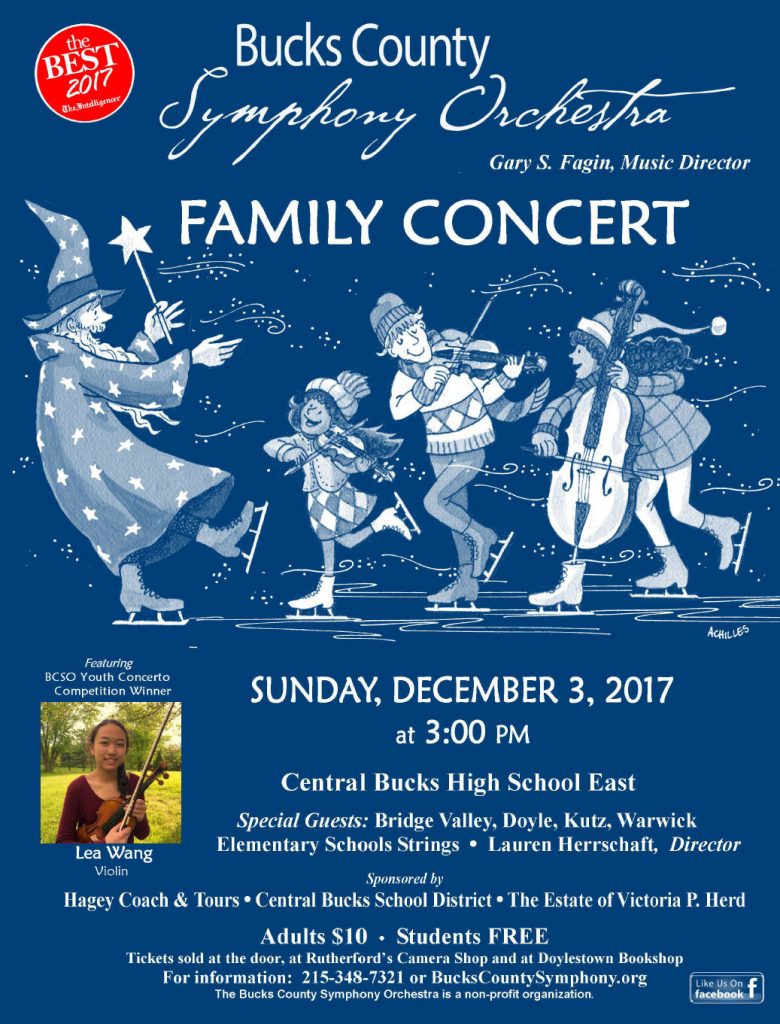 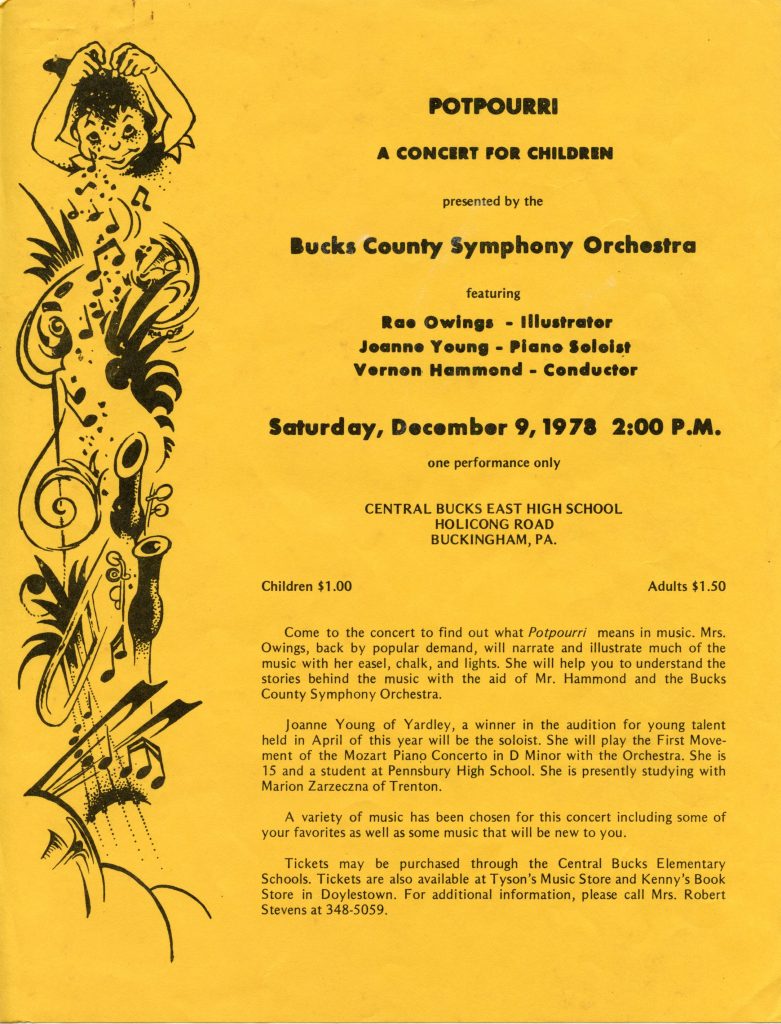 At its very first meeting in 1953, the Bucks County Symphony Society established as one of its primary purposes the promotion of “musical education programs in which the children of Bucks County, Pennsylvania … can participate.” By the BCSO’s fourth season of classical concerts, several discussions had taken place about the desirability of producing an additional concert specifically geared toward young people. So it was that on February 8, 1958, the first Children’s Concert—co-sponsored by the Junior Women’s Club of Doylestown— enthralled a sold-out audience of children and their parents at the new Lenape Junior High School. Tickets were 50¢ and all adults were required to be accompanied by at least one child 12-years old or younger! Listeners thrilled to the sounds of Mendelssohn’s Midsummer Night’s Dream, Tchaikovsky’s Nutcracker Suite and other family favorites. Fourteen-year-old Pamela Stover of Langhorne played the Rondo movement of Beethoven’s Second Piano Concerto, initiating the tradition of highlighting student musicians performing concerto movements with the Symphony.

For the second Children’s Concert in December 1958, a competition was held to select a student soloist. Auditions for Children’s Concert soloist have been held annually ever since, and by 1998 the event was known as the Youth Concerto Competition. A substantial number of the young performers who were chosen as winners over the years have gone on to be highly acclaimed concert artists, graduates of distinguished music schools such as Julliard and Curtis Institute, and members of major symphony orchestras throughout North America and Europe. 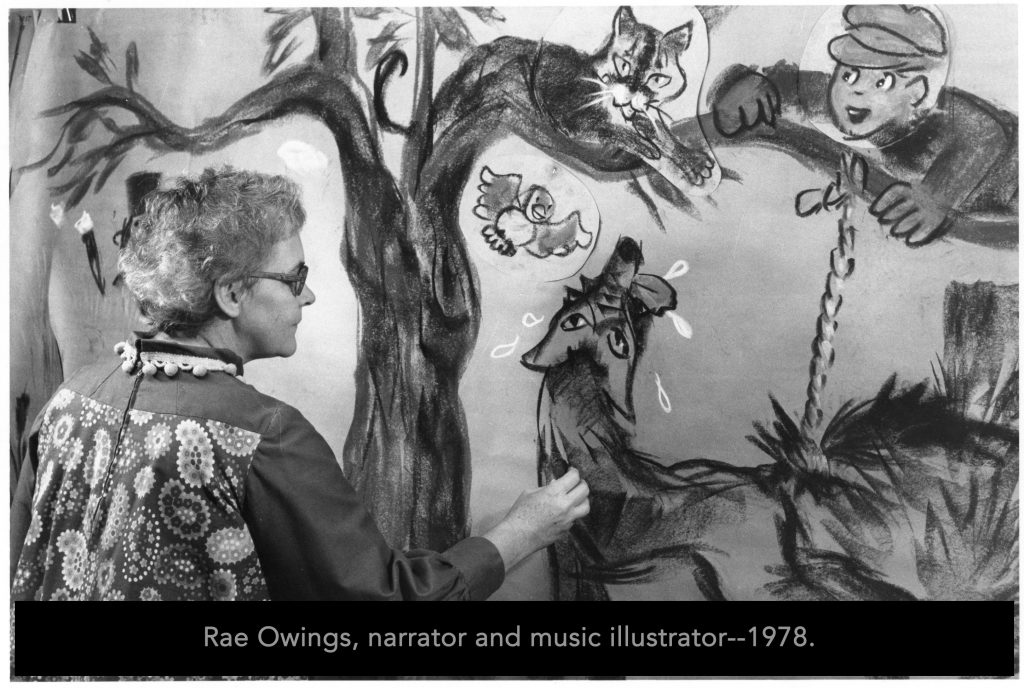 Special appearances by well-known guests have been a tradition at these concerts, including celebrities such as Gwen Davies, cartoon voice of Casper the Friendly Ghost (1964); Fran Allison, national children’s TV show host (1965); Rae Owings, artist & musical illustrator (1972, 1973 & 1978); Captain Noah, Philadelphia children’s TV show host (1976); and Mike Berenstain, an author of the Berenstain Bears book series (2015). Without a doubt the most famous guest artist was a 12-year-old Curtis Institute student named Hilary Hahn, violin soloist in February 1992, who was soon to become one of the premier violinists in the world.

In keeping with the principle of providing educational opportunities for local school students, a myriad of young musicians from schools throughout the county have been invited to participate in BCSO Children’s, Youth and Family Concerts. These have included students from the Bucks County Ballet, Dance Theater of Pennsylvania, and Gotta Dance Studio; the Suzuki Class from the Community Conservatory of Music; the Youth Orchestra of Bucks County; and bands, choruses, orchestras and 4th grade percussion ensembles from the elementary, middle and high schools in the Central Bucks School District.

The Children’s Concert was re-named Youth Concert (sometimes called Young People’s Concert) in 1992 and has been styled the Family Concert since 2014. For several years, it was even billed as “A Concert for the Young…and the Young at Heart”! By whatever name, this vitally important outreach program of the BCSO has benefited an immeasurable number of boys and girls in the past 60+ years. In fact, the readers of The Intelligencer voted the Family Concert as the Best of BucksMont in 2017 for Family Entertainment! Although the concerts now compete with a wide array of family entertainment attractions each December, they continue to be attended annually by several hundred enthusiastic young listeners and their families. Where else can the whole family enjoy an afternoon of great music and experience the thrill of watching the stars of the future for just $10 per adult ticket and free admission for students of any age?