In the Beginning: Creating an Orchestra

As the summer of 1953 drew to a close, America was a land at peace and brimming with optimism for a prosperous future. This was particularly evident in the burgeoning suburbs of the nation’s great cities, where increasingly affluent citizens yearned for more convenient access to cultural institutions and for opportunities to participate in local musical ensembles, especially choruses and symphonic orchestras.

The spirit of the times reached the charming small towns of central Bucks County, as two groups of local amateur musicians aspired to join forces with the intent of forming a symphony orchestra. One, a group of string players, had been meeting weekly at the Buckingham home of Dr. Elmer Reinthaler, an economics professor and vice president of the National Agricultural College (now Delaware Valley University), who also taught a course in music appreciation. Coincidently, a woodwind quintet had also been gathering regularly in players’ homes to perform chamber music. The two groups had a strong desire to perform symphonic repertoire, and began to reach out to other amateur musicians in the area. According to flutist Sandy Eastburn, commenting 55 years later in a local magazine article, “we had good people, and very quickly saw the possibilities.” 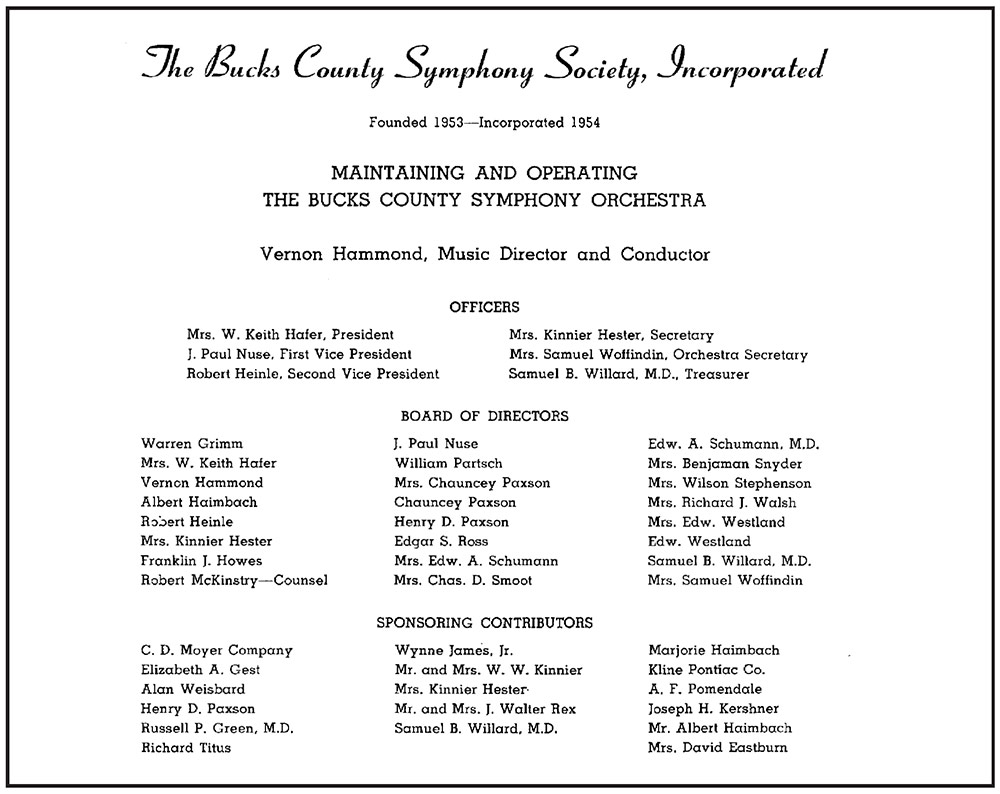 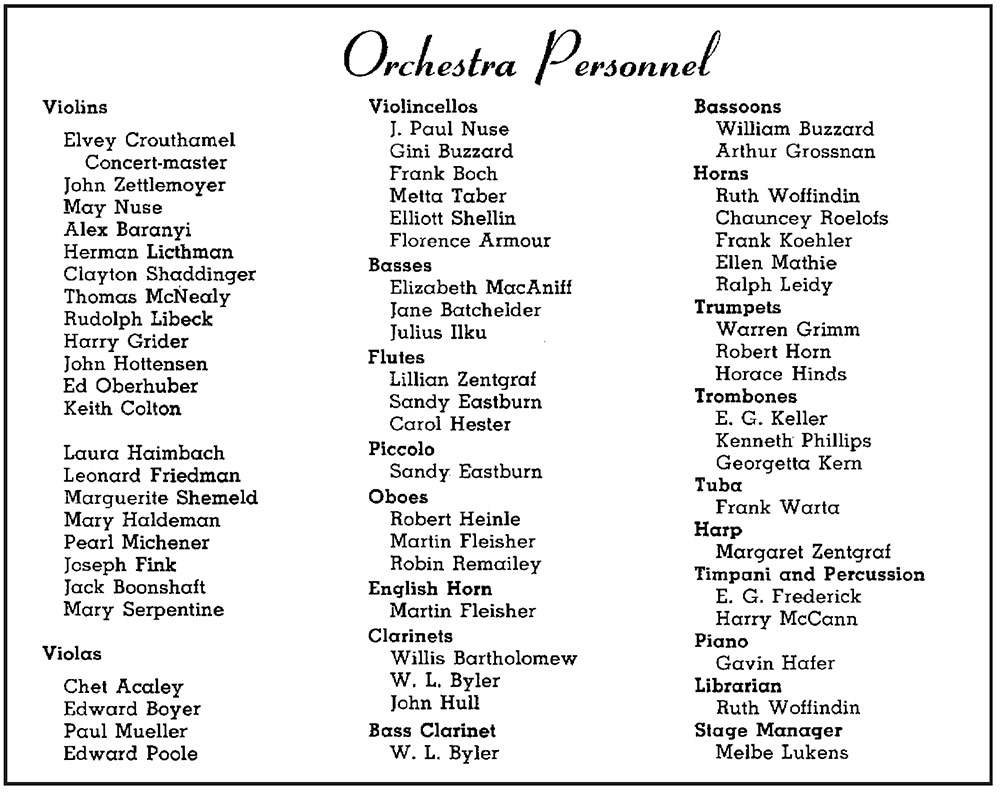 Above: Pages from the program book of the first BCSO concert

The first meeting of the nascent “Bucks County Symphony Society, Inc.” was held on September 26 at the home of Gavin Hafer to “discuss ways to aid and encourage a symphony orchestra in Bucks County.” Other participants were Dr. Samuel Willard, Robert Heinle, Carol Hester, Paul Nuse and Ruth Woffindin. This group decided to ask Vernon Hammond of Fairhill (Hilltown Township) to be the conductor, determined that Wednesday evening would be the best rehearsal day so as to avoid conflicts with the Bucks County Chorus and Lansdale Symphony, and agreed to personally contact as many people as possible about forthcoming rehearsals. Within weeks, the original group of six formed themselves into a Steering Committee, formally adopted the name Bucks County Symphony Society, organized committees, and approved a constitution. Dr. Willard took the lead in drawing up the documents for formal organization.

The first rehearsal of the fledgling BCSO took place in the band room of the recently-opened Central Bucks High School (now C.B. West) on September 29, 1953, with about two dozen musicians present. The first Annual Meeting of the Society was held in November, dealing with the various musical and financial needs required for future success. The 38 attendees were designated charter members of the Society and the first Board of Directors was elected. Mr. Hammond reported that “the orchestra has had…eight rehearsals and possesses all the potential of being an excellent musical addition to Bucks County.”

Following the initial concerts on March 27, 1954 in Doylestown and on May 8 in Langhorne, the Society began making plans for its first full season of performances. In the fall, the Society announced a membership drive to reach out to “all who wish to help support the Bucks County Symphony Orchestra.” Membership classifications ranged from Member ($2) to Life Member ($1000), with various levels in between. The Orchestra was described to potential supporters as “composed of eminent musicians who no longer play professionally and of talented amateurs from the area.”

During the 1954-55 season, the BCSO proudly presented a full series of concerts: 3 pairs of Friday and Saturday evening concerts with performances in Doylestown, Perkasie and Langhorne, each one sponsored by the local Lions Club. The vision of the Founders had become reality, and this culture-rich community has had the good fortune for nearly seven decades to count the Bucks County Symphony Orchestra as one of its treasured institutions.